Introduced in March of this year, the UCIe standard is a new die-to-die interconnect standard for high-bandwidth, low-latency, power-efficient, and cost-effective connectivity between chiplets. It is also the first specification to include an interface that is compatible with optical links. Ayar Labs’ TeraPHY™ optical I/O chiplet, using an Advanced Interface Bus (AIB) interface, is the first optical interconnect to be “UCIe compatible” and poised to deliver on the promise of disaggregated system architectures for the next era of computing.

Large compute systems typically use an architecture where compute and memory resources are tightly coupled to maximize performance. Components such as CPUs, GPUs, and memory must be placed closely together when connected electrically via copper interconnects. This hardware density results in cooling and energy issues, while persistent bandwidth bottlenecks limit inter-processor and memory performance. These issues are exacerbated in compute-intensive applications like HPC, AI, and compute-intensive data analytics.

Today, new disaggregated system architectures with optical interconnect are being investigated to decouple a server’s elements — processors, memory, accelerators, and storage — enabling flexible and dynamic resource allocation, or composability, to meet the needs of each particular workload.

Universal Chiplet Interconnect Express (UCIe) is a new die-to-die interconnect standard for high-bandwidth, low-latency, power-efficient, and cost-effective connectivity between chiplets. UCIe was developed because chip designs are running up against the die reticle limit. UCIe provides several benefits over other standards, including:

According to Uday Poosarla, head of product at Ayar Labs, “UCIe has significant advantages over other standards, including scalability, interoperability, and flexibility. UCIe is the first standard to incorporate optics into chip-to-chip interconnects. The CW-WDM MSA, another new standard, provides a great framework for the optical connections, complementing the UCIe standard.” Ayar Labs is focused on bringing optical I/O into the datacenter to remove the “last mile” of copper interconnect and solve the bandwidth density and scaling problem. Ayar Labs was the first to introduce an optical chiplet using Advanced Interface Bus (AIB) as the interface. UCIe is an evolution of the AIB interface, so Ayar Labs’ current AIB-based optical chiplet is compatible with UCIe standards. The Ayar Labs solution includes the TeraPHY™ in-package OIO chiplet and SuperNova™ laser light source, which can be incorporated into a UCIe-compliant chip package. Each TeraPHY chiplet delivers up to two terabits per second of I/O performance, or the equivalent of 64 PCIe Gen5 lanes.

HPE and Ayar Labs: Ushering in a New Era of Innovation with Silicon Photonics

Justin Hotard, EVP and General Manager of HPC and AI at Hewlett Packard Enterprise, and Charles Wuischpard, CEO of Ayar Labs share their perspectives on the strategic collaboration between the two companies to design future silicon photonics solutions for HPE...

This technical paper aims to give an outlook of future advanced antenna systems for 5G and 6G wireless networks. The trend to increase the peak data rate and to reduce latency and power consumption will continue in the future.

A key barrier to unlocking future system performance is overcoming the bandwidth bottlenecks that limit inter-processor and memory performance. Current solutions, such as HBM and DDR5, are constrained because of thermal and signal integrity issues. New HPC and AI... 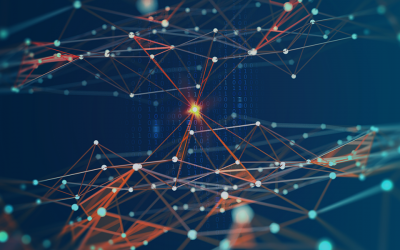 Today’s enterprise-level artificial intelligence (AI) models are growing in both size and sophistication at an unprecedented rate. Unfortunately, the traditional architectures found in data centers cannot satisfy the evolving demands of these AI systems. An emerging...

END_OF_DOCUMENT_TOKEN_TO_BE_REPLACED

It Takes an Ecosystem

In 2015 Ayar Labs was founded to drive the next phase of Moore's Law using our in-package optical I/O technology to remove one of the major bottlenecks in modern computing architectures. That objective remains at the heart of what we do, but industry-changing...

END_OF_DOCUMENT_TOKEN_TO_BE_REPLACED 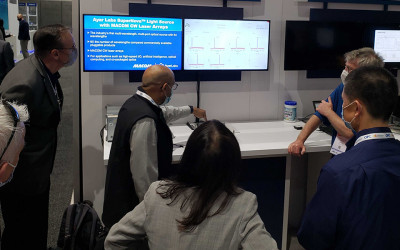 On the Threshold of a World Connected by Optical I/O

Last week we attended OFC in San Diego, the largest global conference and exhibition for optical communications and networking professionals. This was our first in-person event since early 2020. It was incredibly refreshing to reconnect face to face with customers,...