Today’s enterprise-level artificial intelligence (AI) models are growing in both size and sophistication at an unprecedented rate. Unfortunately, the traditional architectures found in data centers cannot satisfy the evolving demands of these AI systems. An emerging solution is to employ the composability capabilities provided by disaggregated system architectures. However, the full potential of disaggregated architectures can be achieved only by means of advanced in-package optical input/output (I/O) technology.

A modern data center can contain hundreds or thousands of cabinets or frames called racks. Each rack can contain anywhere from 10 to 40+ bays or shelves. In a traditional aggregated architecture, each shelf contains a server (in this context, “aggregated” is taken to mean “collected,” “gathered,” or “grouped”). In turn, each server features a motherboard containing one or more XPUs (CPUs, GPUs, FPGAs, ASICs), memory in the form of DDR DRAM modules, and storage in the form of solid-state drives (SSDs).

As computational workloads for tasks like AI and high-performance computing (HPC) have evolved to be larger, more complex, and more diverse than ever before, this traditional architecture has struggled to keep pace. For example, some AI tasks may require thousands of GPUs and be GPU-centric, leaving CPUs and memory underutilized. Contrawise, other AI tasks may demand vast quantities of memory as compared to the number of XPUs, thereby leaving large numbers of CPUs and GPUs sitting idle. 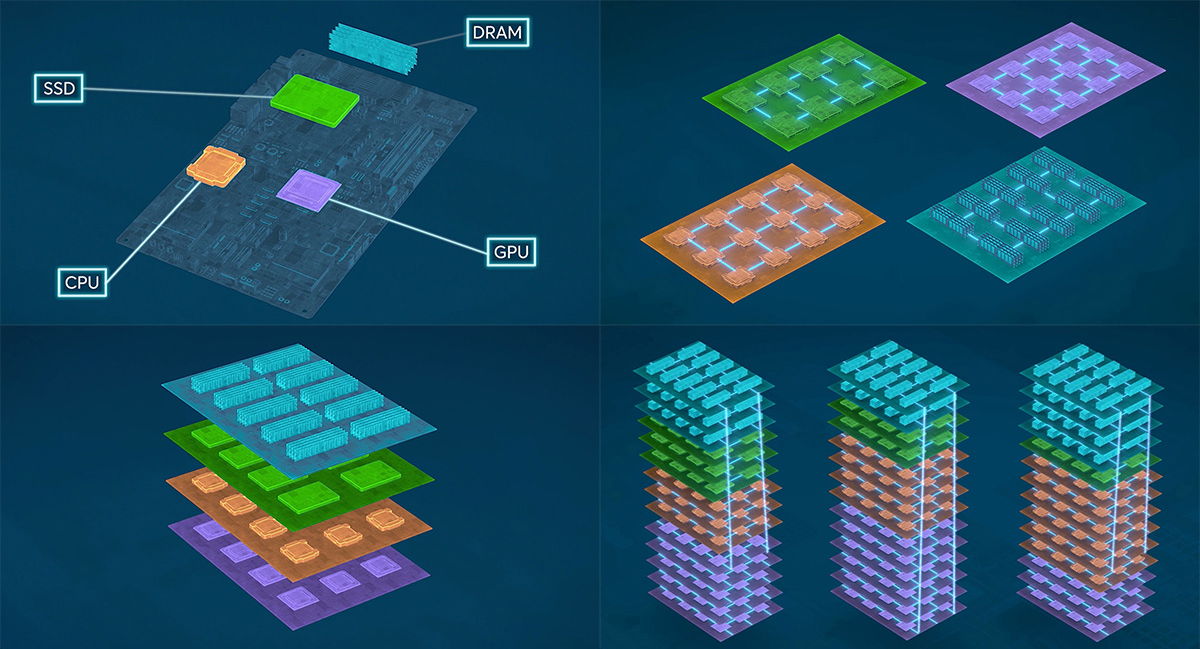 The alternative is to use a disaggregated architecture, in which each shelf in the rack specializes in only one type of component (CPUs, GPUs, RAMs, SSDs…), which is referred to as “resource pooling.” (Figure 1.) Using this form of disaggregated architecture leads to the concept of composability, in which virtualized resources are automatically composed in near real time to meet the computational and memory requirements of each task on an application-specific basis. Once an application has completed its task, its resources are released back into their respective pools, at which point they can be provisioned to future applications in different ratios.

For disaggregation and composability to work, it is necessary for data to be able to pass from shelf to shelf and rack to rack at lightning speed with extremely low latency. Unfortunately, these bandwidth requirements far exceed the capabilities of traditional copper-based electrical interconnect technologies.

The solution is to use optical-based interconnect, but it is not sufficient to simply take existing devices (CPU, GPU, memory, etc.) and augment them with external optical interconnects. To achieve the necessary transmission speeds and bandwidths, the optical interconnect must be incorporated inside the device packages.

As just one example, a common use case is deep learning recommender models (DLRMs), which are typically run on GPUs and which have a large memory footprint coupled with relatively small compute requirements. Since their data is stored in High bandwidth memory (HBM) on the GPUs, these models require a lot of GPUs to store the data, leaving the GPUs’ compute resources underutilized. Disaggregation helps with this by balancing the memory and compute resources appropriately (Figure 2). 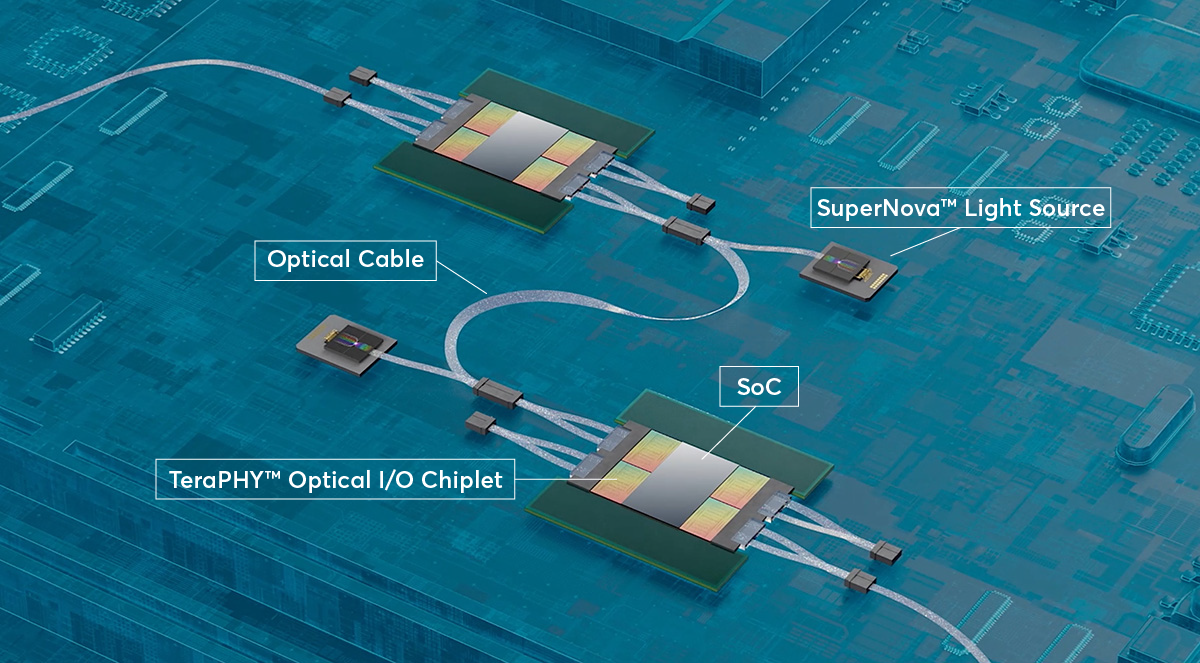 Chiplets are small integrated circuits, each containing a well-defined subset of functionality. Multiple chiplets can be combined with the main silicon die by means of a base layer called an interposer or an organic substrate, with everything being presented as a single package to the outside world. By employing silicon photonics built on standard CMOS manufacturing processes, TeraPHY optical I/O chiplets allow the core device to communicate with the outside world at the speed of light.

The remaining piece of the puzzle is provided by the SuperNova laser light source. The use of patented micro-ring photonic modulator technology means that each SuperNova is physically small and parsimonious in its power consumption. The combination of TeraPHY chiplets and SuperNova laser light sources is set to disrupt the traditional performance, cost, and efficiency curves of the semiconductor and computing industries by delivering up to 1000x bandwidth density improvements at one tenth the power compared to traditional copper-based electrical interconnect technologies.

With optical I/O, it’s now possible for disaggregated racks of CPUs, GPUs, memory, and storage to be located tens, hundreds, or even thousands of meters from each other.

The future is closer than you think

To learn more about how our optical I/O solutions can power disaggregated architectures and unleash the full potential of AI, visit ayarlabs.com/teraphy/ and ayarlabs.com/supernova/

Ayar Labs, a leader in chip-to-chip optical connectivity, has expanded its executive team to further commercial development, with the addition of Lakshmikant (LK) Bhupathi, Vice President of Products, Strategy and Ecosystem, and Scott Clark, Vice President of Manufacturing and Operations…

In artificial intelligence (AI), increasingly complex algorithms, larger datasets, and process-intensive workloads lend to an insatiable demand for compute, memory, and storage, as well as higher-bandwidth, lower-latency communication between these components.

As 5G networking transforms the telecommunications industry and next-generation 6G is close at
hand, the need for increased bandwidth (BW) across wireless and wired infrastructure components
has become obvious.

Five Technology Trends to Watch in 2023

Advancements in AI applications led the 2022 headlines given the trends in Natural Language Processing (NLP), Deep Learning Recommender Models (DLRMs) and the latest advancements with ChatGPT. We look forward to what AI will bring in 2023. In all these use cases, data management is key to ensuring the AI models continue to advance.

END_OF_DOCUMENT_TOKEN_TO_BE_REPLACED

Ayar Labs is moving ahead on many fronts as we continue to build toward volume production with a major business win and seasoned additions to our executive team.

END_OF_DOCUMENT_TOKEN_TO_BE_REPLACED 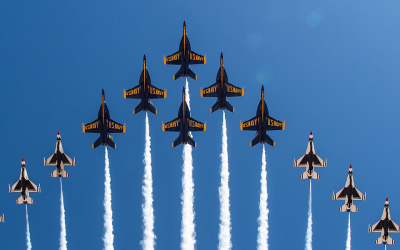 The power and sophistication of modern radar systems is growing by leaps and bounds. These systems already offer capabilities that couldn’t have been dreamed of just a few short years ago. Furthermore, ongoing developments mean that these systems are poised to...